World reacts and Will.i.am rebuke Kanye West for saying 400 years of slavery is a choice

A very sensible, dependable and more reasonable rapper Will.i.am has criticised Kanye West’s “harmful” and “ignorant” suggestion that slavery in America was a choice.

How any black man who grew up in the West (especially America) who have seen or read the history of slave trade could make such a stupid, senseless and provocative remarks is totally beyond comprehension.

watch the interview below

Some of these idiots who rode on the back of great black American successful musicians to stardom seems to have forgotten so quickly what the first black musician, artist or rappers before them went through to pave way for people like them to burst on the scene and make money.

West sparked controversy when he said during an interview with TMZ Live: 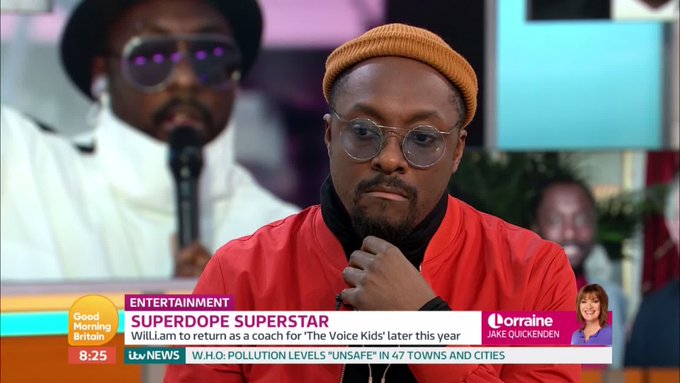 Kanye West is becoming a classic example of a choke ice black man who seems to look at himself in the mirror, thinks he is WHITE and better than other black people. The kind of guy who will refer to black people as ‘them blacks’

The black eyed peas and Voice UK mega star Will.i.am speaking on ITV’s Good Morning Britain seems upset about West utterances and rightly so being a black man and knows how insensitive such statement is.

He said “That statement was one of the most ignorant statements that anybody that came from the ‘hood could ever say about their ancestors, that slavery is a choice. What are you talking about?”

You can see a sober reflection on his face when he talked about it, 400 years of slavery, millions died on the journey to slavery while millions more died in slavery to develop western world with no record of them and no thank you.

He added: “That’s not Kanye.

“To me that’s a different person that’s saying that. And I hope it’s not to raise awareness so he could sell a record and some shoes, because that would be the worst thing to do.

“To stir up a very touchy race situation and you be the benefactor from it.

“So I encourage you, if you really believe this, give your shoes away for free, give your album away for free – I don’t like talking about going against my community, but that is harmful.

“I will not throw my ancestors under the bus to profit.”

He also said that West’s comments “broke my heart”, because it made him think of his “grandmother’s grandma, who was a slave”.

“You don’t choose if you’re owned. When you’re a slave you’re deprived of education. That’s not choice, that’s by force.”

In case you forgot or your parents didn’t tell you, your ancestors were kidnapped on the streets of Africa, brought to America and around the world, forced into slavery against their wishes in chains and shackles and those who refused were killed without record or remorse.  Those that were sick during the journey were fed to fishes in the ocean.  Millions of your ancestors bodies lies in the bottom of the Atlantic ocean

with no single acknowledgement till today. Holocaust are being celebrated every year for the death of a million Jews but when was the Millions and millions of your ancestors killed during slavery ever celebrated or marked, except for blacks to be killed all day long on the street of your great country which you’re in the process of making GREAT WITH TRUMP.

You think it’s by choice for this number of people?

Please go back and ask your mother and grand parents what slavery really meant to their generation, also ask black men on the streets of America who are not rich and famous like you what they have to contend with everyday to survive or to even get the basic things of life.

Kenya is one of those people who blame black people for their own oppression. Why won’t he thing like that,  he rolls with the president isn’t it?

he is on a mission to make America great again. but i tell you bro, no matter how much you roll or mingle with white folks which i have no issues with but you always gonna be black and your Ass is always gonna be black. You will always be described as a ‘BLACK MAN’ love it or hate it and a descendant of ‘SLAVERY’.

David Baddiel, a comedian compares slavery with holocaust and says it wasn’t a choice either.

Tatyana Ali, A US actress twitted

Romesh the comedian sees the funny side of the truth, he wrote – ‘Kanye West is an incredible advert for finishing college’

West’s friend, musician John Legend, retweeted a post that read: “Kanye’s rhetoric continues to fuel the racist right-wing folks who believe that black people are responsible for their oppression.”

The Good Morning Britain presenter Piers Morgan also tweeted: “Wow. That may have been the most powerful 5 minutes in @GMB history. Thank you @iamwill for your candour & brutal, passionate honesty. I hope @kanyewest gets to hear it.” he also praised Will.i.am for his interview.

In the world we live, people are open or entitled to their own opinion but not on an issue like that, it shows how shallow and insensitive some people are to very sensitive and painful issues. Yes we all want to move on from issues of slave trade and live our lives completely away from it but we do not want to be reminded in a brutal and total stupidity like that. When i look at slave trade pictures and think of what our ancestors went through sometimes it makes me want to cry but to hear a black man saying slavery was their choice goes beyond comprehension.

A Brief History of Slave Trade for Mr Kanye West

The forced migration of Africans to the thirteen original British colonies and the United States during the time of slavery involved an estimated 472,000 people who left the African continent. Of them, more than 83,000 never made it to these shores: almost 18 percent died on the notorious Middle Passage.

As a result, approximately 388,000 Africans arrived in the United States between the mid-seventeenth century and 1860 alone.

These estimates provide a some idea of the relative scale of the forced migration to the United States. As a whole, the transatlantic slave trade displaced an estimated 12.5 million Africans, with about 10,650,000 surviving the Atlantic crossing. Thus, even though a substantial number of Africans actually reached the United States, they were only a small proportion, about 3.6 percent, of the total number of Africans who were brought to the Americas. More Africans went to Barbados (435,000), while almost three times as many went to Jamaica (1,020,000). The number of African arriving in North America was considerably less than those who were taken to Brazil (4,810,000).